The Homunculus, introduced in the city of Velika, is a unique pet system in TERA. This pet can be set to buy and sell in a personal shop. However, the player will have to take care of the Homunculus in order to keep it alive.

TERA offers 4 types of homunculi, each type with its own unique look. A player can own as many homunculi as they want but can only use one at the time. They are tradeable until bound to the character.

Once the player has acquired an egg, they will have to place it in an incubator. It only takes a few minutes to hatch and the process doesn't require any direct supervision allowing the player to do other things while they wait. Hatching isn't without any risks as there is always a chance that an egg will not hatch, leaving a usless ‘Unhatched Egg’ in your inventory.

You must use the incubator to hatch your egg. Drop the egg in a socket and press 'Incubate'. Once the incubation is complete just press 'Collect' to retrieve the item from the Incubator. The number of orbs your Homunculus can support is determined at hatching. 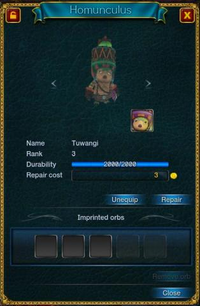 The Homunculus Labs offers 3 types of orbs: “Buy”, “Sell”, “Buy and Sell”. The more actions the orb offers the higher its value. Attaching an orb to the Homunculus has its risks as well, since they have a chance to break upon attachment. A higher-grade orb will automatically replace a lower-grade orb of the same kind. The player may attach as many orbs as the Homunculus has open orb-slots for.

Orbs can only be bought from the merchant located in the Homunculus Lab.

Note that the player is allowed to attach multiple orbs at a time to a Homunculus, but the Homunculus will only be able to use one orb at the time. Thus if you have bought separate 'buying' and 'selling' orbs, you won't be able to buy and sell at the same time. You must attach the specific 'buying and selling' orb to have a Homunculus who will both buy and sell. 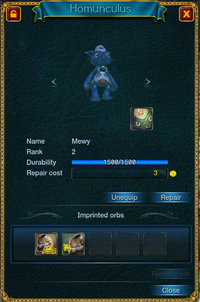 You can only place your Homunculus on dedicated locations. Those locations are marked by a logo on the 'radar'.

Player is able to place their Homunculus in their current location.

Player will be unable to place the Homunculus at his current position.

The player will see one or more icons next to the Homunculus status window (see image below). Right-clicking on one of these orb function icons will open a shop which functions according to the selected orb.

After activating an orb, the player will enter the shop interface. Place the items you wish to sell in the shop and press 'We're open!' 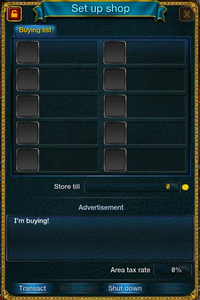 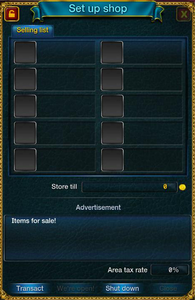 You may close your shop through the shop interface. Once open, there will be a new button that reads 'Shut Down'. Shutting down will move all the remaining items in your inventory.